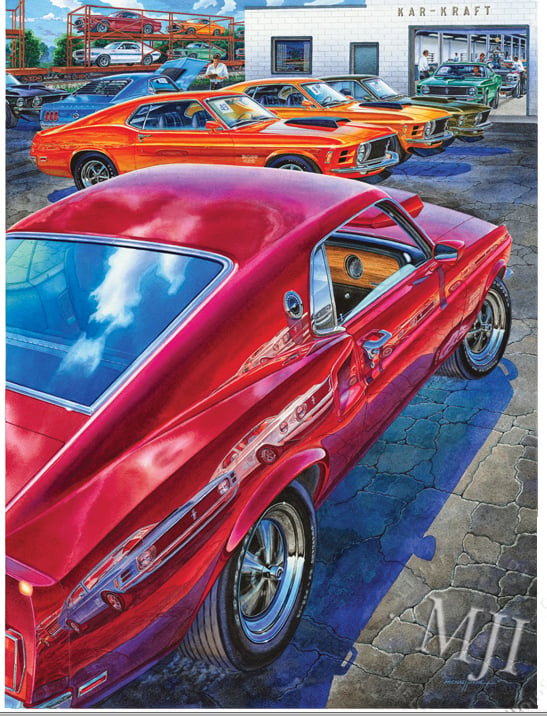 Following the highly acclaimed, Any Color So Long As It's Black, the second painting in Michael's 'Building Horsepower Series', Boss Building lets us take a peek into the past — to catch a glimpse of where one of the world's most famous big blocks got it's start.
To compete in Nascar with the new Boss 429 engine, Ford had to make this monster motor available to the general public. So, in 1969, FoMoCo unleashed this bad boy, the Boss 429!
Built at the Kar Kraft Brighton Michigan Plant, these new Boss Mustangs received numerous performance upgrades, including, but not limited to, a beefed up suspension and moving the battery to the trunk. The only visual clues to the car's transformation, were a small decal on the front fender and a not-so-subtle hood scoop — body color in 1969 and black in 1970.
Michael takes us back in time to a summer day in 1969 as a Grabber Green Boss rolls off the line. Inside the building, an engine is being lowered into the next street racer. 'Joe' in quality control checks under the hood of a Grabber Blue '70, while the train loaded with Bosses and Shelbys leaves the plant.