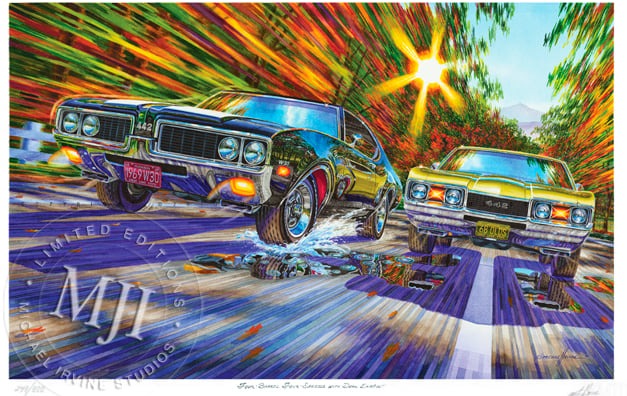 Introduced in 1964 as an option on the Oldsmobile F-85 and Cutlass models, the 442 became a model in it's own right from 1968 through '71. In 1968 and '69, when equipped with the W-30 option — which included the under bumper air scoops attached to the intake hoses that fed directly into the chrome topped dual snorkel air cleaner — these cars became true pavement-pounding muscle machines.
Featuring two of GM's premier muscle cars, the ‘68 and ‘69 Olds 442s, Four–Barrel Four–Speeds with Dual Exhaust, is the 5th painting in Michael’s “American Blacktop” Series. Michael puts you right in the path of these two bad boys … giving you a dramatic low view of what makes these Holiday Coupes so cool — the under-bumper air scoops and the striking red plastic wheel wells. Optioned with the W-30 package and complete with scoops and stripes, these high performance muscle cars enjoy tearing up a quiet country road.